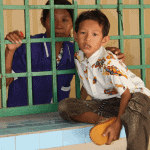 Meet Chit Minea, one of the residence of HOPE Children’s Home (HOPE CH)

A six years old boy that was born in a prison and has lived there all his life until now. He was introduced to us by a German Lawyer who knew his mother. His mother approved of Chit joining HOPE CH after several meetings and finalizing the paperwork Chit arrived at the HOPE CH on the 17th of January 2012.

Chit Minea is curious and asks many questions, “Why is it so cold in there?”, “Why are there so many things inside?”, “Why are there so many cars, where are they going?” Everything in and around HOPE CH seems wonderful, mysterious and curious to him. The trees, the little fish in the water bowl, the laptop, the fridge and all the other kids there.

He loves to ride the bicycle and wants to play football. He still doesn’t know how to play, but it doesn’t matter, he enjoys it all the same and runs and kicks around. He has not yet been enrolled at school and is privately tutored so that he can catch up with the other children academically. He enjoys playing with the children but is still working on adjusting to his new home and environment.

We are so glad to have Chit Minea at HOPE CH.[/cs_text][/cs_column][cs_column fade=”false” fade_animation=”in” fade_animation_offset=”45px” fade_duration=”750″ type=”1/2″ style=”padding: 0px;”][x_blockquote cite=”Sam Peilke, Director of Chibodia” type=”left”]His first day was amazing, he cried after separating from his mother but he stopped as soon as he was walked to the car and he started looking at everything wide-eyed. He has never seen any of what he is seeing and has been seeing. What I would give to see the world through his eyes for five minutes…

Thanks again for fully supporting this very special project called Hope. It is Hope! Right now it’s the only Hope for a small boy from a small prison world, now being loved and slowly and attentively getting introduced to the world. He will sleep assured that he is safe and can now have Hope for his future.[/x_blockquote][/cs_column][/cs_row][/cs_section][/cs_content]